Over a year ago, Vitaly Friedman from Smashing Magazine asked me if I’d be game to do a conference talk without slides, something more about showing work in action. 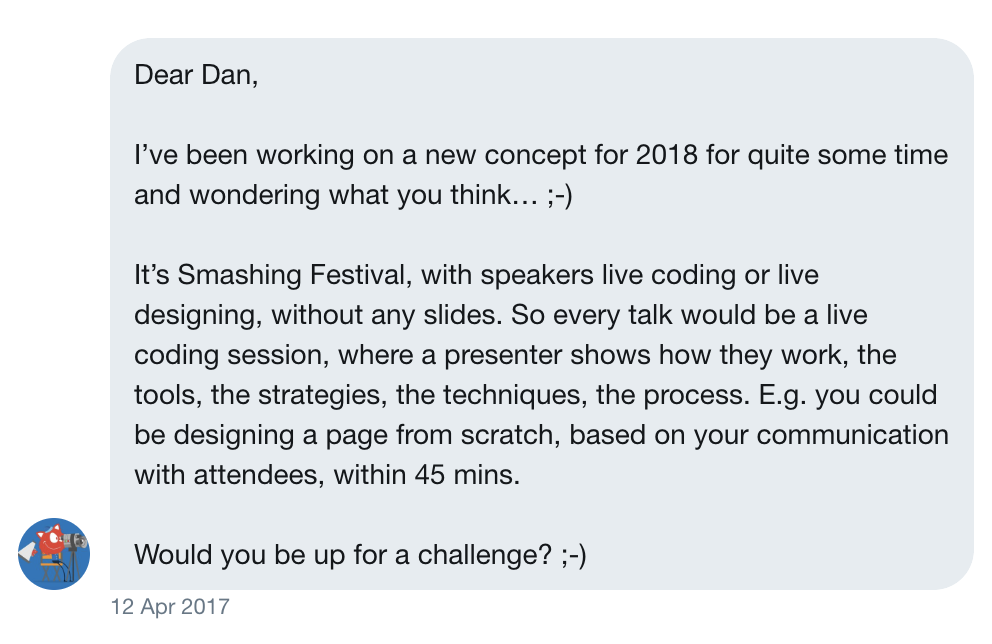 I was immediately excited to do it, as I could immediately think of how I’d do that, since I do that almost daily with my apprentices. (I previously wrote down the details of that framework in Stealing Your Way to Original Designs.)

I normally don’t stress too much about talks nowadays as I’ve given my fair share of them, but this one was a bit different. Trying to do final prep the night before was difficult, because I didn’t have slides to review. Also, because of the format of the talk, I didn’t want to prep extensively. Too much prep might dilute the whole concept of showing how I make decisions while designing.

So I decided the best prep would probably to get the best night’s sleep I could get.

Yesterday, I gave that talk.

I planned to redesign the RAICES site on stage. In my rough rehearsals, I designed a fair bit of the site. On stage, all I got to was buttons. 😶

I walked off stage uneasy about the talk, and felt uneasy about it all day. One thing I’m most proud of is my talks is feeling like like share a lot. With this one, I don’t think I shared enough. The feedback I got from attendees was all nice, but I also know that people who hated it probably wouldn’t come up to me to say so.

After sleeping on it though, now I feel great about the talk. Two pieces of feedback I got that stand out:

As a speaker, that’s more than a great outcome. Upon reflection, getting an outcome like that without spending weeks and months laboring over crafting the “perfect” narrative for just the right sequence and quantity of slides is wonderful!

I tend to view my talks as a performance. And I think there’s merit to that. But I hadn’t considered much that there’s another format that can achieve similar outcomes. In the language of Blair Enns’ Win Without Pitching Manifesto, I could “replace presentations with conversations.” I do that almost completely in client work but not for conferences.

I didn’t expect this, but I’m now seriously considering this format as a way I do talks at other conferences. (I’d love feedback about that from other conference organizers, if you have opinions.)

All this is to say: thanks to Vitaly and the Smashing Magazine and Smashing Conference crew for challenging the typical format. I learned a lot about how I can be a better speaker.